Introduction
In the early 1980s, then Chief Medical Officer Thomas Jones of the Ministry of Health of Antigua-Barbuda requested for a school-based dental public health programme to be developed by the Faculties of the University of Rochester and Eastman Dental Centre, New York State. Following discussions and visitations from both groups a fluoride rinsing programme, using increased dosages, was implemented in Barbuda in 1989. This is a presentation based on the article by Dr Frank Carberry in 1999 which outlines the historical, planning and implementation of this programme. 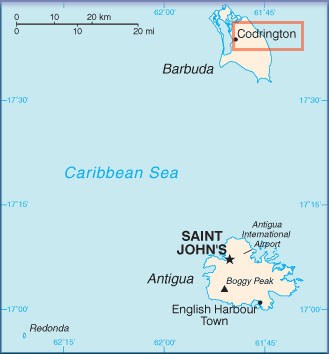 Map from The World Factbook

Background
Early attempts by the dental staff of the Antiguan Ministry of Health to introduce oral health education including tooth brushing, flossing and dietary advice and curriculum change that introduced dental education in schools did not modify the Antiguan children's behaviour. Tooth decay continued to be a major problem. The decision was made to increase the dosage of fluoride rinse in an effort to improve the situation. 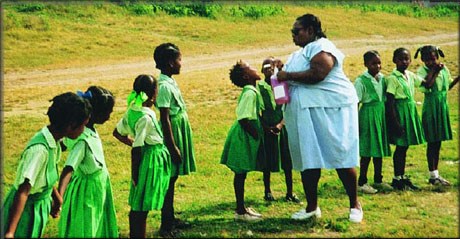 Project Outline
In 1989 the Ministry of Health selected Holy Trinity School in Codrington Village on the island of Barbuda.

The village was relatively small with about 400 children in the school. In addition as it was an isolated area the chances of loosing the child during follow up examinations would be unlikely.

The drinking water showed 0.15 ppm of fluoride which was computed to be equal to .3 ppm in a temperate climate (nearly one third of the standard fluoride levels).

The Antiguan dental staff hence began the project by carefully examining the delivery system of the fluoride rinsing programme itself.

It was decided to use Ministry of Health personnel from a health centre nearby instead on relying on class teachers.

Using paper or plastic cups was too costly, instead the children learned to tip their heads back and the fluoride rinse was dispensed directly from the container.

With a little practice both children and the staff learned to administer the fluoride without causing child to child contamination.

0.2% Fluoride Rinse was used, and the children were coached to hold the rinse in the mouth without swallowing for longer periods of time, 5 minutes being ideal.

Rinsing was performed at a time when children would be in class and away from food or drink for a period of time after using the rinse.

The "bubble gum" flavour was the favourite amongst the children and best tolerated when rinsing. 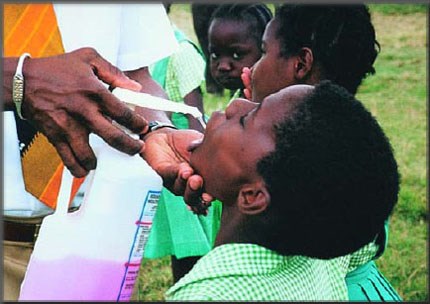 Achievements
During the 9 year period of 1989 - 1998, the children of Holy Trinity experienced an 86% reduction in caries in the permanent teeth.

During 1989-93 only source of dental care available in the island was provided by visiting dentists, who did not offer restorative care. Number of extractions during this period declined by 30% and there was a marked increase in the number of fillings observed suggestive of an increase in demand for traditional dental care, which was being sought in places other than Barbuda.

Application of fluoride rinse produced re-mineralization in the primary teeth. In 1989 the mean missing first and second primary molars among 6-8 year-olds was .5 and .6 respectively while in 1992 these figures dropped to .23 and .24.

The cost of the programme in Barbuda was US $ 1/child/year - only 10 cents/child is required for supplies. 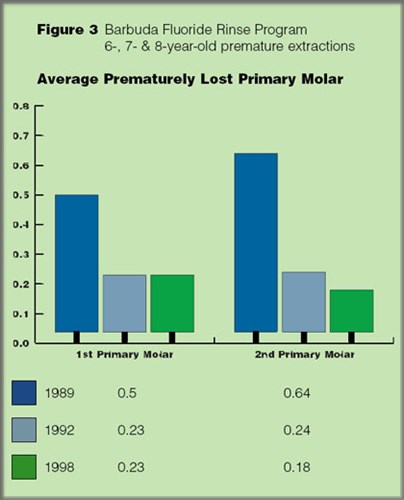 Conclusion
The usual "treatment" for carious teeth in Antigua-Barbuda was to extract the tooth concerned. Introducing an effective, simple and cost effective school based fluoride rinsing programme would prevent caries and encourage re-mineralization of both primary and permanent teeth improving quality of life of the children. 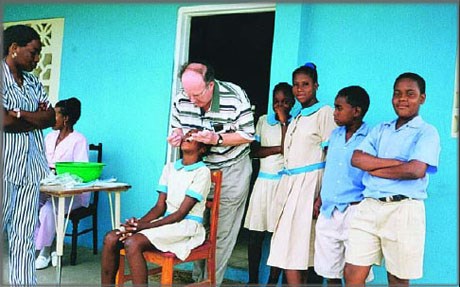