“Childsmile” is a national programme designed to improve the oral health of children in Scotland and reduce inequalities both in dental health and access to dental services. It is funded by the Scottish Government (Macpherson et al 2010). It commenced as pilots in 2006, and since 2011 has been delivered as an integrated programme in all Health Board areas throughout Scotland.“Childsmile” is a complex public health intervention and aims to adopt a common risk factor approach, recognising the importance of multidisciplinary and multi-settings approaches – integrating oral health with other groups and agencies. The programme also follows the principles of the national approach in Scotland for supporting the wellbeing of children and young people and improving outcomes by offering the “right help at the right time from the right people.” This is known as Getting it Right for Every Child (GIRFEC) and supports young people and their families to work in partnership with the services that can help them (Scottish Government 2017).

In the United Kingdom trends in children’s dental caries declined rapidly from the 1970s to the late 1980s, attributed to the introduction and widespread use of fluoride toothpaste during this period. However, by the 1990s, these improvements had begun to slow in Scotland, with children having among the worst rates of dental decay in the UK and Europe. Inequalities in dental decay were also becoming apparent, with those from the lowest socio-economic groups bearing the greatest burden.

The Scottish Government and National Health Service (NHS) Scotland are at the forefront of child oral health improvement. In response to the trends outlined above, the government commenced funding a nationwide universal supervised nursery toothbrushing programme in 2001.

An action plan for improving oral health and modernising NHS dental services in Scotland was published by the government in 2005 and this formed the basis for the development of the wider Childsmile programme, incorporating the established supervised toothbrushing intervention. The action plan included new investment for improving child oral health, and successive government administrations have continued to provide this funding.

The programme was designed and is evaluated using a theory-based approach. Logic models were developed following multi-stakeholder input. These identified the evidence-based health improvement activities which in theory were considered to be associated with long-term improved child oral health outcomes. Shorter-term service- and behaviour-change intermediate outcomes which would be required to achieve the health outcomes were also identified.

It is envisaged that every child in Scotland will, from birth, have access to “Childsmile”.

At a population level, every child will have access to:

Directed support targeting children and families in greatest need through:

* priority nursery / school settings defined by children being from the most socioeconomically deprived communities.

Additionally, as part of a more upstream approach to health improvement, the programme is involved in advocacy for and involvement in development of national strategies and regulations relating to diet and nutrition. 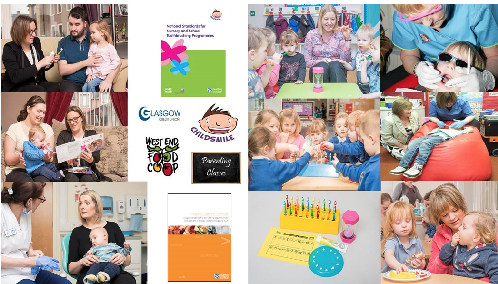 Every newborn child in Scotland is linked to “Childsmile” via the universal child health surveillance system within the Universal Health Visitor Early Years Pathway (Scottish Government 2015) (Figure 1). Health Visitors see all children and their parents/carers on a regular basis between birth and 5 years. Health Visitors provide advice on oral health, distribute a Dental Pack, encourage dental attendance from a young age, and where they feel additional support may be required; they make a referral to a DHSW.

Tailored support and advice in the family home
Linking to dental services and facilitating child attendance at a dental practice;
Signposting / linking to other community organisations and initiatives via social prescribing (e.g. community engagement, food co-operatives, infant feeding programmes).
For the most vulnerable families, a longer period of home support may be required before engaging with dental services.

There is encouragement for children to attend primary care dental services from six months of age. A programme of preventive care, tailored to meet the needs of the individual child, is provided by the dental team. This includes: 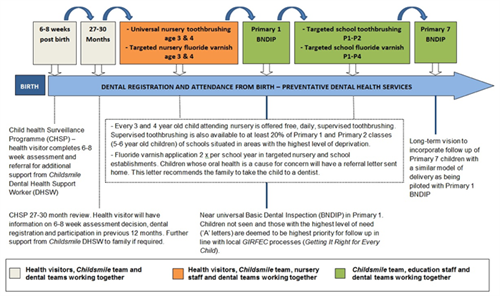 The National Dental Inspection Programme (NDIP 2017): is the national dental surveys of five-year-old (Primary 1 school year - P1) and eleven-year-old children (Primary 7 school year - P7). NDIP has two levels: a Basic Inspection (BNDIP, which all five-year-olds / eleven-year-olds receive each year), and a Detailed Inspection (dental epidemiological representative sample of five-year-old / eleven-year-old children in alternate years). BNDIP involves a simple assessment of the mouth of each child using a light, mirror and ball-ended probe. Each child is placed into one of three categories depending on the level of dental health and a letter sent to their parents, and pathways of ensuring children in high need receive appropriate dental care:

Nationwide Coverage: “Childsmile” was piloted from 2006 and achieved population-wide national roll out in 2011. The programme has received strong and successive government commitment and funding (across three different political administrations).

Multi-setting and Multi-agency Working: A major achievement of “Childsmile” has been to develop and sustain buy-in from many stakeholders (Figure 2) – creating a broad coalition and collaboration with common goals. The programme has also been able to develop and deliver oral health improvement interventions outside of traditional dental clinical settings – into education establishments, community settings, other healthcare settings (integration to Health Visitor Early Years Pathway), and children’s homes. 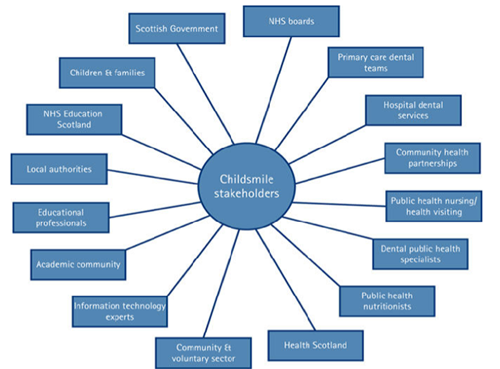 Supported by NHS Education for Scotland (NES) – the national organisation for education and training in NHS Scotland – the “Childsmile” Programme has developed a highly skilled and trained workforce including extended duty dental nurses (EDDNs) and dental health support workers (DHSWs).

Dental nurses have been upskilled to apply fluoride varnish (in practice and nursery settings), and also deliver tailored oral hygiene toothbrushing instruction and dietary advice to parents/carers of young children.

Approval and changes to the dental regulations (via the General Dental Council) were sought and achieved to include fluoride varnish in the Scope of Practice of dental nurses.

“Childsmile” has also developed a new workforce group – the DHSW have been recruited, trained, and funded. They are embedded and work closely with health visitors, dental practices, and the Public Dental Service (who coordinate and administer the nursery and school components of the programme).

A strength of the programme is the integrated theory-based evaluation, led by the University of Glasgow, in collaboration with “Childsmile” stakeholders, and other academic partners, funded by the Scottish Government. This work is underpinned by a logic model and robust national data monitoring systems (including a bespoke “Childsmile” IT system developed by University of Dundee Health Informatics Centre (HIC)).

The evaluation research includes: i) a pioneering big data linkage project – linking multiple routine administrative national health and education datasets to create a birth cohort to evaluate the complex multiple interventions of “Childsmile” with the range of service and health outcomes; ii) an in-depth multi-faceted process evaluation – assessing the barriers and facilitators to the delivery of “Childsmile” programme and its components; iii) an economic evaluation – investigating the cost effectiveness of the programme and its components; and iv) an embedded randomised control trial of the nursery fluoride varnish programme – Protecting Teeth @ 3 trial (Wright et al 2015). 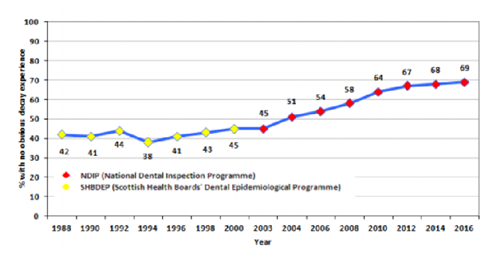 A Scotland-wide population study aimed to assess the association between the roll-out of the “Childsmile” national nursery toothbrushing programme and a reduction in dental decay in five-year-old children (Macpherson et al 2013).

Figure 4 shows that before the start of the nursery toothbrushing programme (time, t = 0) the mean d3mft was increasing, and only after the programme commenced, did the mean d3mft begin to decrease. The results of the same study also showed that the slope of the uptake in toothbrushing was correlated with the slope in the reduction of d3mft (correlation = -0.64; -0.86, -0.16; p = 0.011). Thus, the improvement in the dental health of 5-year-olds was associated with the uptake of nursery toothbrushing.

Figure 4. Mean d3mft for 5-year-olds in Scotland in relation to commencement of nursery toothbrushing

NOTE: Year 0 is a year before the start of nursery toothbrushing intervention (dotted vertical line). Period (-2 to 0) is a reference period.

The study showed that the estimated cost of the nursery toothbrushing programme in Scotland was around £1.8 million per year. The estimated cost of dental treatments in the baseline year 2001/02 was just under £8.8 million, while in 2009/10 it was around £4 million. In 2002/03 the costs of dental treatments increased by 2.4%. However, in the following years the costs decreased dramatically with the estimated annual savings ranging from £1.2 million in 2003/04 (14% of costs in 2001/02) to £4.7 million in 2009/10 (54%). The NHS costs associated with the dental treatments for five-year-old children decreased over time. In the eighth year of the toothbrushing programme the expected savings were more than two and a half times the costs of the programme implementation (Figure 5).

Ongoing Challenges: Health inequalities remain a significant challenge. Figure 6 shows data from the NDIP report – the proportion of five-year-old children with no obvious decay experience by the Scottish Index of Multiple Deprivation (SIMD) quintiles (NDIP 2016). Quintile SIMD1 is the most deprived and quintile SIMD5 is the least deprived. Despite improvement in all groups, there are clear and persistent inequalities in child dental health over time, with only 55% of 5 year old children having no obvious decay experience in the most deprived areas compared with 82% in the least deprived areas. 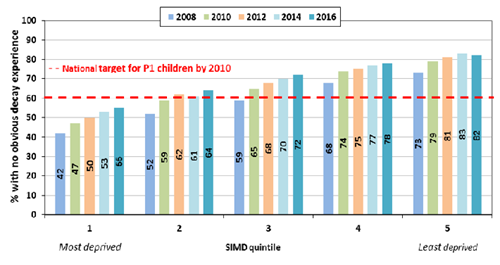 The “Childsmile” programme has had significant achievements and been associated with major improvements in child dental health over time. However, socioeconomic inequalities persist, with children from the most deprived backgrounds bearing the greatest disease burden. A new national Oral Health Improvement Plan has recently been published (Scottish Government 2018) and sets the future direction for the programme to expand.

The future direction of the “Childsmile” programme includes: i) optimising the delivery of the existing programme through lessons learned from the evaluation, this will include a focus on vulnerable groups (e.g. children looked after by the state; McMahon et al 2017); ii) further community development work, this will include further work with the third (NGO) sector, social prescribing / linking with ongoing community-based initiatives; iii) influencing policy and programmes (“upstream”), including common risk work as part of the Non-communicable Disease (NCD) agenda (e.g. obesity / sugar strategy).

Scottish Government (2017). Getting it right for every child (GIRFEC) http://www.gov.scot/Topics/People/Young-People/gettingitright (Accessed Feb 2018).