In 2001 health authorities in Wales received approximately 1.5 million pounds for a three-year dental fissure sealant programme targeting the 6-8 year olds from deprived areas. The caries preventative programme was created to address evidence of a marked social gradient associated with caries.

Background and Rationale
Despite a significant fall in dental caries over the last 30 years, caries still poses a significant problem. There is evidence that this is greatest in deprived areas. It has been found that in Wales, 45% of 12 year olds (surveyed in 2004/05) had at least one carious tooth, with a mean DMFT of 2.41 in this group of 6,749 children. Therefore, the project targets the 6-8 year olds during the time when the first permanent molars are erupting. Fissure sealing teeth at this age aims to prevent decay in the permanent dentition.
Due to the socio-economic deprivation link with caries, the programme was first targeted at areas of greatest need, including the 100 electoral divisions with the worst Index of Multiple Deprivation.

Two hundred and fifty six schools were eligible for inclusion in the programme. 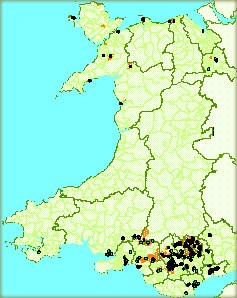 With dental caries remaining a significant problem, particularly in deprived areas of Wales, the fissure sealing programme has been successful in providing oral health education, toothbrush packs and fissure sealants to 6-8 year olds in Wales.
The programme is resource intensive, with 1,923 teeth sealed per £100,000 in 2008. However, the number of teeth sealed does not exclusively reflect the outcomes of the programme. For example, delivery of the oral health aspect helps improve the working relationship between the Community Dental Service and schools.