Together with his Namibian co-workers Dr. Christer Priwe initiated and implemented the "Smiling Schools" project in Namibia. Dr Priwe was recruited by the Africa Groups of Sweden. The government of Namibia and the WHO funded the project. We thank Dr. Priwe for providing us with the report and pictures on this programme, which we have summarised here. 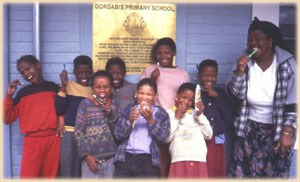 Even though caries among Namibian children is still low (DMFT 12-year-olds 1.2 in 1991) many communities are being exposed more to caries causing factors. Caries prevalence increased rapidly with age particularly in the urban population. The import expenditure for sugar, honey and confectionery almost doubled from 1993 to 1994 from N$ 89.983.000 to N$ 167.584.000. On the other hand, the fluoride concentration in drinking water is often below the optimal concentration for prevention of caries. 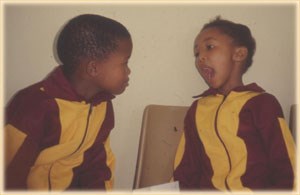 hmm.., you have lovely teeth
Therefore there is an urgent need for influencing the oral health habits of the general population, especially the children, who can be educated in correct oral health measures that would prevent the onset of caries and gum diseases.

Namibia has nearly 1,300 primary and combined schools with approximately 400,000 children. For this pilot project nine health regions were chosen where public dental clinics were available and permanently staffed. 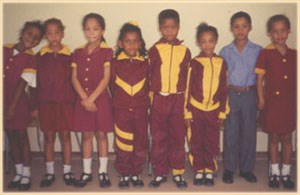 waiting to be examined for the survey

A base line survey was conducted by Dr Priwe to obtain data on oral health, oral hygiene habits, diet etc among primary school children. Training workshops lasting two and a half days for teachers and school health nurses were conducted on oral health promotion. 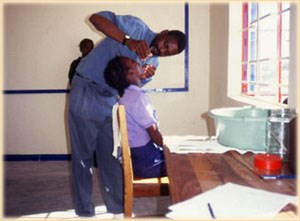 base line survey in progress..

The project was implemented first in 3 schools. Toothbrushes were provided to schools and sold to children. Toothpaste was not used during brushing sessions at school, but children were encouraged to use fluoride toothpaste at home. Two oral health monitors/class were trained and tooth-brushing sessions were carried out during breaks under their supervision 6 times every month. 50 - 95% of the children participated. 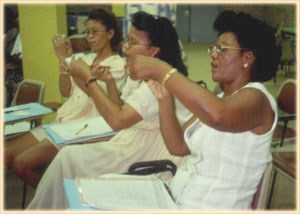 Artistic oral health corners were created in the classrooms and oral health was taught during lessons. 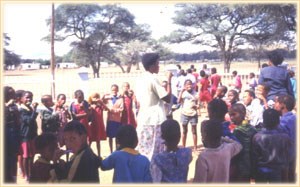 teacher and children brushing teeth together 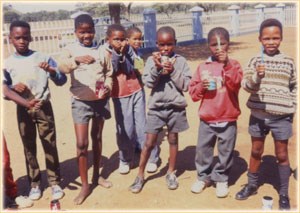 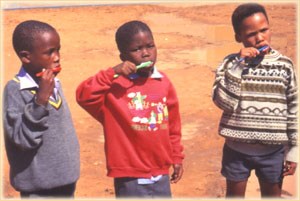 this is the way to clean ones teeth properly!

Constraints to the progress of the project

Dr. Priwe sees the lack of dental personnel at district level restricts the programme to the urban centres. This he hopes will be overcome in the future when 21 dental therapist posts will be filled.
Toothbrushes are not available all the time due to poor distribution. This can be solved if brushes are ordered in bulk by the ministry and distributed to schools.