Since 1994 – 2009, decline of dental caries experience in Germany among children’s deciduous teeth is 36.8% which is significantly less than the 72.7% seen in the permanent teeth , highlighting the need for caries prevention programmes targeting the pre-school children.

The aim of this intervention programme was to carry out and evaluate the effect of an intensified preventive programme in kindergartens in Northern Hesse (2006- 2008).

In the Counties of Marburg-Biedenkopf and Waldeck-Frankenberg, North Hesse, dental practices routinely adopt specific kindergartens. Once a year, the dentists and their teams visit the kindergartens to which they have been allocated, help the children to clean their teeth and educate them on a healthy diet. The children also have the opportunity to visit the dental practices, and parents’ evenings are held. 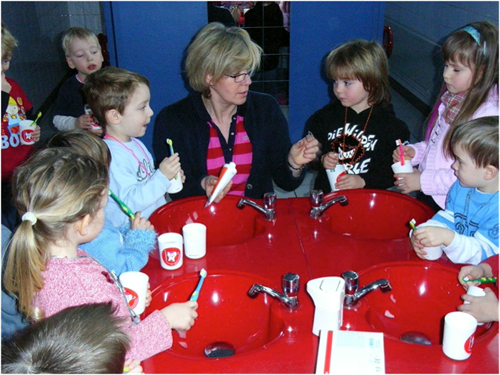 The results show t hat an intensified preventive programme in kindergartens, based on supervised daily tooth brushing, has a positive effect on the dental health of preschool children.

By Stjernswärd J, and Pieper K.