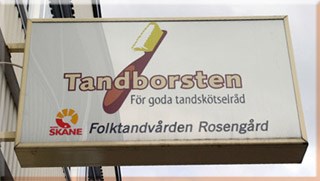 Introduction
Rosengård is a suburban district within the city of Malmo, south of Sweden, with approximately 20,000 inhabitants. The vast majority of the families are of immigrant origin (85%), speaking more than 50 different languages. The socioeconomic level is below average and the proportion of unemployed adults is high. An oral health survey from 2002 showed that 85% of the 3-year-olds exhibited signs of caries compared to less than 30% in the surrounding city districts. Thus, there was an urgent need to plan and implement an oral health program targeting preschool children in order to bridge the gap in oral health. The program was planned in close association with the local dental public health authorities, directed to the parents/guardians and with the idea of easy access and administration.

Map from the world factbook

Background and rationale
Several studies from Europe and America have demonstrated that immigrant children and children from deprived communities have significantly more caries than the children from the area of study. In such a situation, a conventional risk-based strategy to combat and prevent the disease is less likely to be effective but community-based outreach activities, directed at all children, should actively reduce disparities in health. There are however a number of barriers that needs to be dealt with such as language problems, low education levels, cultural beliefs and traditions. Though all children living in Sweden have the right and access to a comprehensive dental care free of charge, many immigrant parents are either not aware of this or are reluctant to access dental care due to bad experiences in their own countries. Thus, the challenge was to find an effective way to reach the families at an early age with an attractive and understandable oral health message. 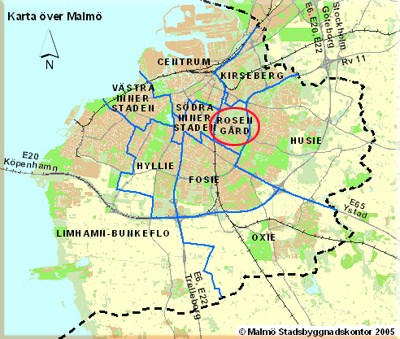 Rosengård - Map from the City of Malmö home page

Project outline
One key factor to overcome this barrier was to move the project out from the clinic and to establish a neutral and natural meeting place in the district's commercial centre. To facilitate communication, colour pictures to illustrate healthy food items and sugar traps were prepared. Further, the tooth brushing instructions were based on "tell-show-do" principles, in training the parents' teeth cleaning skills. An oral health information leaflet was produced and translated in English and to other common languages spoken in the district.

A total of 804 2-year-old children, born between July 1998 and June 2000, were included in the project. Those born between July and December 1997 formed a historical reference group with no active intervention. In order to get easy access, an information centre called "Tandborsten" ("The Toothbrush") was established and equipped with comfortable furniture, material for counselling and special facilities for tooth brushing. This outreach facility was located in the Rosengård centre, a popular shopping centre.

The oral health program consisted of four visits during the first year; at 24, 27, 30, and 33 months of age with a final examination at 36 months. It was managed by two specially trained dental assistants and the children were individually recalled for each visit.

The parents/guardians were interviewed by a structured questionnaire concerning ethnic background, medical history, feeding and oral hygiene habits. The questionnaire was accompanied by a booklet with illustrations and pictures (toothbrush, baby bottle etc) in order to facilitate understanding. Based on this interview, dietary recommendations focused on avoiding nocturnal meals and sugar-containing snacks were given. Assistance from professional translators was arranged on demand but required in only 3% of all cases. At each visit, the accompanying parent was instructed and trained in the practical aspects of how to brush their children's teeth. The children were then given a toothbrush and a fluoridated toothpaste containing 1,000 ppm NaF that was offered at a discount price. The parents were also provided with free fluoride tablets and encouraged to give the child one fluoride tablet each day (0.25 mg NaF) in the evening after tooth brushing.

The clinical examinations were carried out by one experienced dentist using a mirror and a blunt explorer. No bitewing radiographs were taken. Presence of visible plaque was recorded and the gingival health was scored as "bleeding" or "non-bleeding" after tooth brushing. Caries was recorded as cavitated or non-cavitated, extracted or filled teeth (deft). 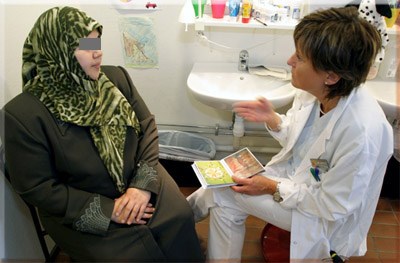 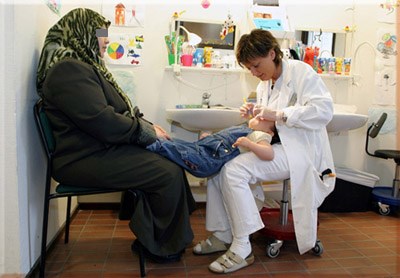 Tooth brushing instructions according to tell-show-do

Outline of the Oral Health Programme (2005) 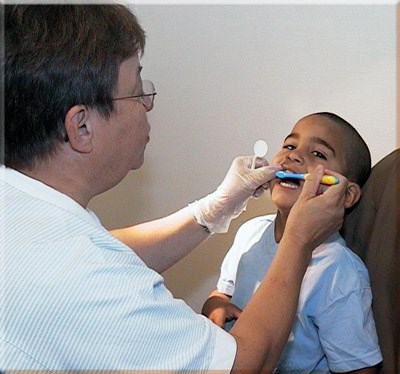 Achievements
The drop out rate after the first year was 8.2% and the main reason was relocation within the country. The compliance was over expectation and 75% of all families showed up as scheduled.

A significant improvement in the number of caries free children was seen in the project group when compared to the reference group, 37% vs. 15% in the follow up examination at 36 months.

The mean caries experience was 2.0 dmft among the project children and 4.4 among the children in the reference group, in the one year follow up examination at 36 months.

The regular use of fluoride tablets was significantly higher in the project group (91%) than in the reference group (11%).

A tendency to more healthy eating habits was seen in the project group.

However, improvement in oral hygiene was not demonstrable in the project group. 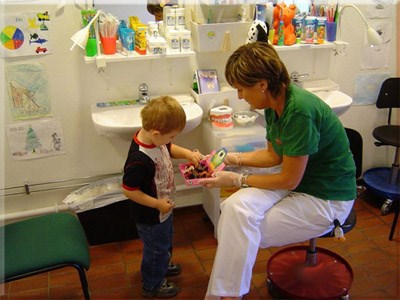 Done! Time for the reward ..

Conclusion
This project suggests that a comprehensive oral health program implemented at 2 years of age could significantly reduce caries prevalence among 3-year-old children living in a low socioeconomic multicultural suburban district in Malmo, Sweden. The outreach activities were mainly based on repeated tooth brushing instructions given to the parents and regular use of fluoride toothpaste and tablets, suggesting that education and fluoride are key factors for improving oral health in under-privileged areas.

This program was carried out in addition to the regular activities of the Public Dental Service. The long-term effects of the program as well the cost-effectiveness will be evaluated at the age of 5-years. 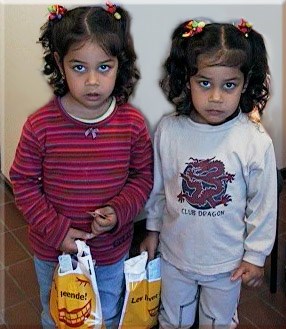 Acknowledgement
The authors wish to thank Eva-Marie Mårtensson and Inga-Lill Sjunnesson for their excellent clinical work and for providing the pictures. 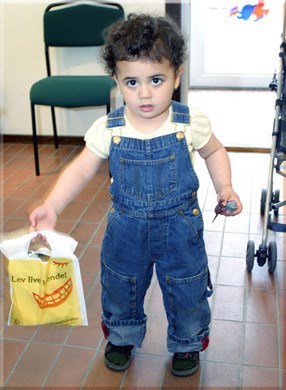 Walking away with fluoride tablets ..

Wennhall I, Mårtensson E-M, Sjunnesson I, Matsson L, Schröder U, Twetman S. Caries-preventive effect of an oral health program for preschool children in a low socioeconomic, multicultural area in Sweden: Results after one year.