Japan map from the word factbook

Introduction
Children with autism are susceptible to oral diseases such as dental caries and periodontal disease partly because of the difficulty in mastering the skills required for routine toothbrushing. As visual support has been used successfully to help such children master life skills, a set of picture cards showing the toothbrushing procedure were developed and evaluated if it benefits children with varying degrees of autism.

Background
Majority Japanese primary schools which provide education for 7 to 12 years olds, have separate classes for children with special needs. Children with mild autism usually study in a regular class and those with moderate autism study in a special class.
This programme was carried out in Osaka, Japan. Children who participated in this programme lived with their parents and were attending primary schools. 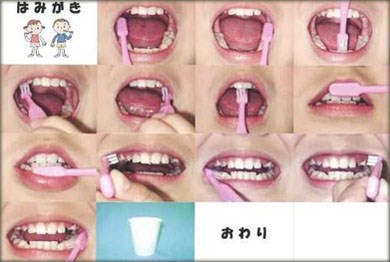 Picture cards for self-toothbrushing. The first card (upper left) indicates the start of toothbrushing and the last (lower right) indicates the end. The pictures in between show the step-by-step procedures. The last card (picture of a cup) connects to the drawing in Fig. 2. 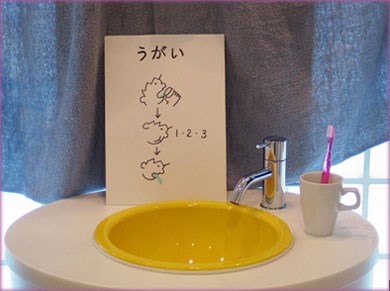 Written instructions for rinsing the mouth after toothbrushing in conjunction with drawings.

Conclusion
The toothbrushing picture cards and the rinsing sheets are useful tools in helping some children with autism master the necessary skills.

Acknowledgements
The authors thank Prof. I. Morisaki (Osaka University) and Prof. N. Niizawa (Baika Women's University) for their guidance. This research was funded by a grant from the 8020 Promotion Foundation.